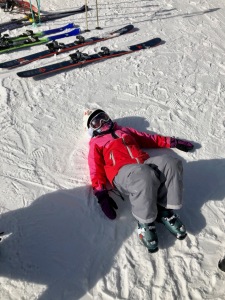 And just like that it’s over.  Typically in March, the spring skiing season is just getting started with lots of sunshine, warm temperatures, mushy afternoon snow, and sitting around in shirtsleeves on the patio with an apres-brew.  I’ve always known in the back of my head that my own personal ski season could come to a premature, ignoble end (probably because of some catastrophe on the slopes or wrapped around a tree) but I didn’t expect it to end for everyone!  Now is the year of CoVID-19 and social isolation is the phrase of the day.  Judging from the early cases of the virus in Colorado, ski lifts are a really good way to pass diseases around, so all areas are shut down as of mid-March. 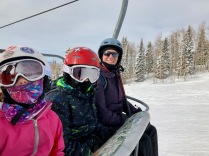 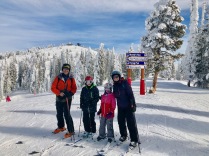 These signs are always fun.

Skiing with this guy has only become more fun!

So, the ski season retrospective comes early this year.  The 2019-20 season was… aborted.  It was good, but far too short compared with the 2017-18 or especially the 2018-19 season it looked likely to mimic in terms of snowpack.  After five years of skiing as a family, we’ve got our system pretty well dialed in and everyone is now comfortable on terrain which is far from boring.  We spent six days (or more typically half-days) at Eldora and our now-traditional three-day weekend at Steamboat, but only managed two days at Copper (both spectacular) and a single somewhat crappy day at Winter Park.  We’d hoped to add Arapaho Basin to our late-season conquests as well as a couple days at exotic Taos down in New Mexico over Spring Break.

So here’s the breakdown:

Despite the disappointing numbers, there were moments of sheer bliss.  There was a powder day at Eldora when I found an excuse to blast through knee-deep powder in the trees on every single run (including a couple on the bunny slope).  There were a couple of days of “fairytale snow” at Steamboat when an upslope storm had flocked the west faces of all the trees leaving us to feel like we were skiing through a wedding cake.  There was a day at Copper when the entire family was having a good day and conquered the steep Triple Threat run on the far east end.  There were several days in there where I felt more “on” on skis than I’ve ever done before, attacking moguls and trees with new vigor alike.

So, short though it may have been, it was a good season.  But let’s hope that next year lasts a bit longer.