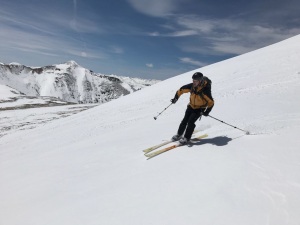 Making it look, just for a moment, like I don’t suck.

Back in the day when my quiver of skis was a lot more barren than it is today, I thought it would be a grand idea to skin up and ski down James Peak.  It turned out okay and was a hoot, but my equipment (in this case, a very skinny set of glorified XC skis with metal edges and some low, soft-leather boots in three-pin bindings) was laughable.  Consequently, I fell down a lot.

Fast-forward eight years…  more skis in the quiver, more miles under my belt, some harder (?), scarier descents, and another attempt on James Peak.  For once, I wasn’t organizing this one; Peter, Jake and Russ were headed out for some skimo and invited me along.

We skinned up.  Even my heaviest backcountry rig is pretty light weight compared to modern AT gear and I definitely had the easiest time on the way up… which is not to say it was easy.  I was sucking wind pretty hard.  The sun was fierce, and the temperatures quite warm.  The mountain was quite popular and there was quite a party going on the summit. 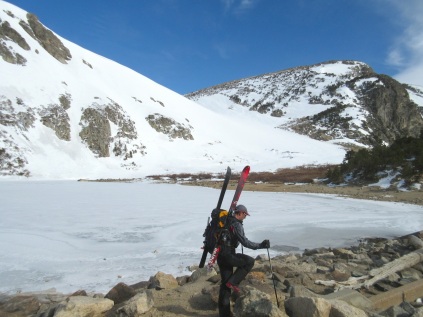 Carrying skis up to the base of the glacier.

Topping out the glacier and getting our first look at the flats and the peak beyond.

Jake nearing the summit with spectacular views all around. 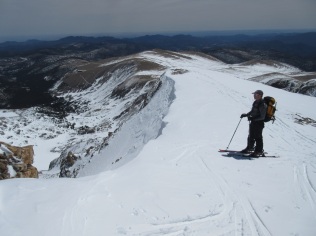 This couloir is probably skiable, but none of us were feeling up to it.

Requisite summit shot. All is right with the world

Time for the easy part.  Last time I stood up here with skis on my feet, I was flat-out terrified.  This time, yeah, the slope was a lot steeper than it seemed coming up, but it was nothing to get the heartrate outside normal bounds.  I made it down with more style and grace than last time, but it would be a stretch to say it was actually graceful.  Peter, Jake, and Russ are all much better skiers than I and their fixed-heels let gave them a lot more leverage in the heavy snow than I had.  Ah well.

Making it look, just for a moment, like I don’t suck at telemark skiing.

It was a great day in the mountains with a couple of my “dad friends” I haven’t done too much with in terms of major adventures before (besides a couple of moderate trail runs and some in-bound skiing).  My ski skills have improved a bit in the intervening years, but I’m a bit disappointed they’re not better than that.  Perhaps it’s time to keep an eye out for a cheap AT set-up.