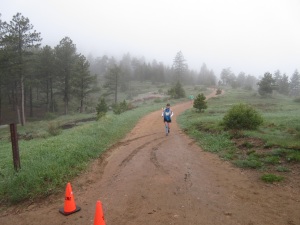 Runners coming in from the West Ridge at mile 14.

Quadrock is a cool race put on by a couple friends of mine up in Fort Collins.  It winds through some beautiful, brutal terrain in Horsetooth Mountain Park and Lory State Park in a 25 or 50 mile jaunt.  I’ve still never actually run it officially (despite my best efforts), but I’ve been involved a few times.  This year I again joined Eric and his merry crew up at the Towers Road Aid Station.  The course is roughly a figure-8 which the 25-milers complete once while the 50-milers complete twice.  Towers is right at the junction of the “8”, so it’s a good place to see everyone two or four times over the course of the day.  Towers is at miles 7, 14, 37, and 43 on the course, but it’s at the top of a big climb no matter which way the runners are coming (and they come in once from each of the four directions).

It’s fun to hang out in the woods for a whole day making friends and influencing people and generally being part of the endurance race atmosphere without having to work nearly as hard as if you’re actually running it.  But you still have to get up bloody early!  2:30 am wake-up, leave by 3:30, rendezvous at the base of the road at 5, drive up the challenging road and be ready for the first 50-mile runners to appear around 6:30.  Runners arrived right on schedule and kept us pretty busy from 6:30 onward into the early afternoon.  I mostly greeted and filled water bottles, directing traffic, and ringing the cowbell. 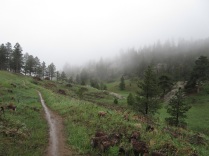 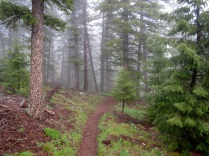 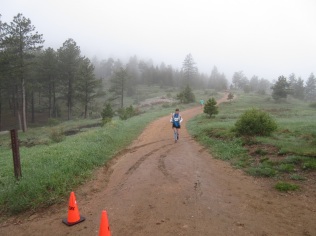 Runners coming in from the West Ridge at mile 14.

Towers Road aid station during a lull in the action

The weather was in the low 40s and raining lightly pretty much all day.  Plus, for me, mid-40s suggests shorts and maybe a long-sleeved shirt… for running!  For standing around in all day, it’s brutally cold and everyone quickly donned all the layers we had in our possession.  We kept ourselves warm dancing around to Eric’s extensive and eclectic playlist (everything from The Little Mermaid to the Humpty Dance).

When things settled down a bit, I lit off for a little running of my own to see the 50-mile course leaders and do some mobile cheering.  I ran down the Spring Creek trail to the Horsetooth side of things (passing runners #3-12), then started up the West Ridge climb back to Towers passing probably another 20 runners on the way including the various friends I’d hoped to see: Jason, Kristen, Ben, Brad, Jon, and a bunch more.

It never really stopped raining and I don’t think I was ever warm, but it was cool and misty and picturesque as hell out there in the foggy woods all day.  Everyone was grateful for our aid and comfort and it was a nice change from the usual.