An important part of cutting-edge scientific research is collaborative meetings like this.

Michele is the nearly-unique combination of an academic colleague who works on very similar topics to me and a well–matched, kindred outdoors partner.  He’s more accomplished as an astronomer than I am (based on head-to-head faculty job application results), but I think I could take him in a running race (actually, let’s not test that, shall we?  Be kind to my ego.).  He moved away from Boulder four years ago and has been regretting it ever since.  Fortunately, he was visiting this week for some work-related things and we decided to reacquaint him, and me, with Colorado mountains.

Michele has moved to various flat countries and has been far from mountains.  But what’s my excuse?  Mountaineering used to be a major hobby of mine, but I’ve pretty much traded the sharp metal and heavy boots for ultra-light running gear and safer routes.  Sure, summits are occasionally bagged, but it’s almost always in running shoes these days.  My big mountain boots, crampons, and heavy gear have been sitting gathering dust for years now.  Time to settle this and other unfinished business.  In particular, Michele and I got turned around by sketchy avalanche conditions on Longs Peak in 2011 and never made it to Chasm Lake. This time, February has not featured very much snow and conditions are fairly stable.

What am I forgetting?  Oh, gaiters!  And avy beacon.  Does this thing still even work?

Back in the day, this kind of trip would have been a major undertaking.  Even though it’s been a while since I was in heavy mode, a trip up to Chasm Lake is pretty casual and there’s not much to tell.  The trail was well-packed up to tree line and the weather down-right uncomfortably hot.  Once we cleared the trees, as usual, the wind hit in earnest.  We fought the wind for another mile to Mills Moraine (Skypotty Junction). 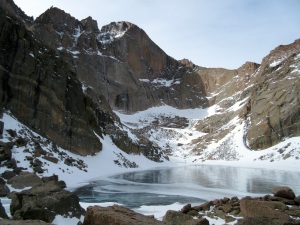 This view never gets old.

There was no need for snowshoes, but we donned traction for the exposed traverse into the cirque and especially above the sketchy Peacock Pool traverse.  This section is very avy-prone and was the cause of our abort four years ago.  This year things looked quite safe with a well-established boot track across.  However, it’s still quite steep (40 degrees?) with a long runout down to the lake, strong winds, and pretty packed snow.  I was glad to have an axe and crampons.  Michele in his light-weight boots made due with my microspikes and a light-weight axe.

From the meadow, a short scrambled up the cliffband brought us to the lake and its stunning view of the Diamond cirque.  The lake was frozen hard to a depth of several meters at least.  The ice was completely mesmermizing with trapped air bubbles and fracture planes which appeared and disappeared as we moved across them.  The crunch crunch of our points competed with the howl of wind coming around the Ships Prow or directly down Glacier Ridge.  The weather, which had been cloudy for most of the ascent, finally cleared a bit with milky sun illuminating the western end of the lake.  We lounged, lunched, and languished.

The snowfield above Peacock Pool is a bit sketchy.

Gloomy weather out over the plains, but sunny in the mountains. 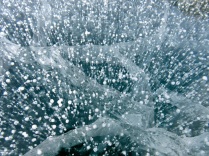 Mesmerizing ice on Chasm Lake. No danger of falling in (the cracks went down a meter at least).

With the wind at our backs and gravity on our side most of the way, the trip back was pleasantly quick as well.  I love the running, but my old love for wild places, harsh conditions, and heavy doings has remained undisturbed.  It’s good to put on pointy metal again and feel the thrill of exposure again.