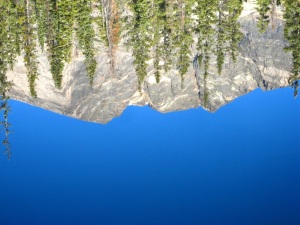 No, this photo is not upside down.

October in Colorado is a weird month.  Unlike summer in the high country, which arrives gradually, winter arrives like a slamming door.  The first significant snowfall of the year could be in September, or it could wait until Halloween.  In any case, by the middle of October, the days are statistically numbered and any chance you get for one last chance in the mountains before the snow flies should be taken advantage of.

Nice colors at the start.

Accordingly, Brian and I met up at the Lawn Lake Trailhead in RMNP and did a “run” up to Ypsillon Lake and beyond.  I’ve been to Lawn Lake a couple times, but never taken the left turn up the long, forested ridge to Ypsillon Lake.  It’s nice.  Steep, decent trail, and something new under the sun.  I haven’t seen Brian since Bighorn (where we had somewhat different experiences), so it was fun to do a detailed debriefing.  He’s trying again, so it looks like I’ll be up there as well pacing him for as little or as much of the course as he would like.  I’m pretty excited about that.

Ypsillon Lake is nice enough, but the real reason to head up there is the faint climber trail which leads from the lake along the stream for a while, then climbs some really nice, 3rd class rock slabs and gullies to the Spectacle Lakes.  The lakes themselves are rock-walled, clear as glass, and support a good echo.  More importantly, they nestle below the incredible ice-cream-scoop cirque of Mt. Ypsillon with it’s towering 2000′ east face.  Boggling! 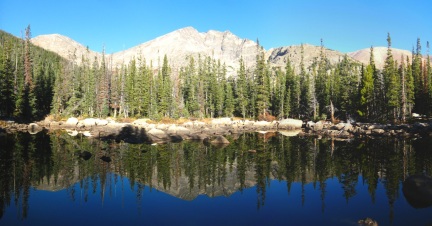 Ypsillon from Chipmonk Pond. You couldn’t ask for better weather in the high country

Nice little waterfall at Ypsillon Lake. The trail climbs up the left side of this.

Brian cruising the slabs on the way to the Spectacle Lakes.

The first view you get of Lower Spectacle is, appropriately, spectacular.

The Four Aces of Blitzen Ridge.

Upper Spectacle Lake and the remnant snow on the Y-Couloir route. 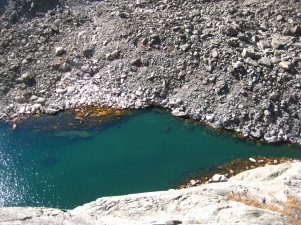 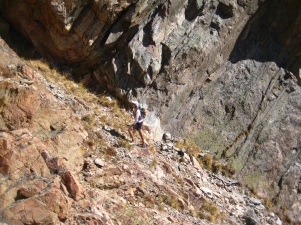 Does this go? Let’s find out.

Mt. Fairchild and the Fay Lakes from Blitzen Ridge

Lower Spectacle from 500′ above. 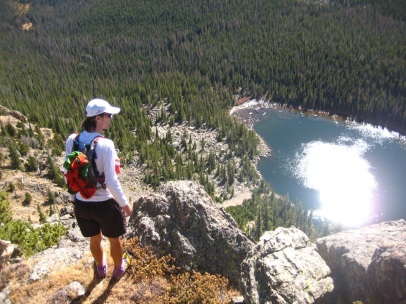 According to the GPS, we’re only a tenth of a mile from the lake… vertically!

I’d been expecting wind and chilly conditions, but it was as nice up there as I’ve ever experienced in most places during high summer.  We lounged by the upper lake, then scrambled up another 500′ via grassy ledges and scree-filled gullies to the base of Blitzen Ridge.  Blitzen to the west is a classic 5.4 alpine ridge route, but we turned east and ran it down toward Ypsillon Lake again.  Unfortunately, the easy ridge-hopping turned into a gnarly descent through thistles and scree, then a bushwhack around to the other side of the lake where we picked up the trail again.

The five miles out to the car was really the only part of the day we actually ran at all, but it was glorious!  Winter could arrive at any moment and I know the depths of February and March will leave me dreaming of snow-free high country jaunts.  This was a good note to finish the summer season on and the photos should keep me content for a while.