My fascination with the Gore Range is well known and has, so far, been well rewarded. It’s a range of jagged mountains in Summit and Eagle Counties less than two hours from the Denver Metro area, yet a lack of 14ers or easy access means that hardly anyone knows of it. There aren’t any conventional guidebooks and no single map does a decent job of covering this complicated and confusing area. I started at the relatively well-known southern end of the range in 2011 and have been slowly working my way north and west each season. At this rate, I’ll stay happy and curious for another decade at least!

It turned out to be a very reasonable route on good trail or easy cross-country travel the whole way. I dragged Ben along for a much-needed introduction to the Gores as well as some much needed company. The Deluge Lake trail climbs aggressively for a few miles before moderating a bit for the rest of the climb to the lake. Deluge Lake sits in a huge cirque between Snow, Valhalla, and Grand Traverse Peaks. The climb up to Snow Pass was far easier than I’d feared; after a brief bit of snow and talus, we found a climbers trail slanting across tundra all the way to the pass. Great views and great weather. Snow Peak itself looked reasonably doable, but Ben was in a more mellow mood, so we hiked up to the north and crested the unnamed Pt. 12835 instead. The descent to Snow Lake was almost entirely on aster-strewn tundra and was also mellow. The Snow Lake cirque is a lovely, secluded spot with flowers, towers, and marmots galore. We frolicked through the fields over a set of hills to Gore Lake. Finding the trail from Gore Lake took a little blind luck, but once we found it, we made great time down through the forest to the familiar, very runnable Gore Creek trail.

Breaking into the flower terrain near Deluge Lake

Deluge Lake and the talus below Snow Pass

I’d make fun of Ben for this, but I was doing exactly the same thing seconds before. 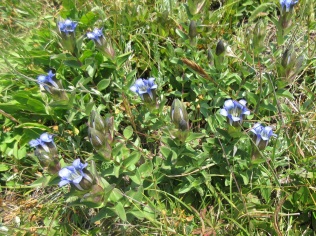 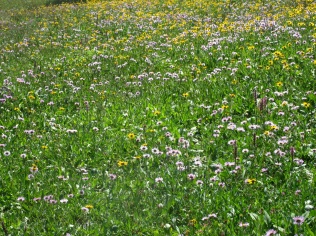 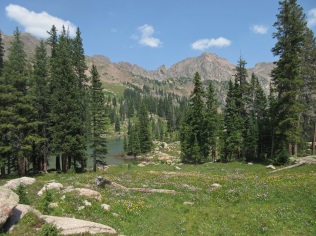 One last view of Gore Lake 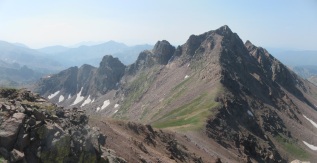 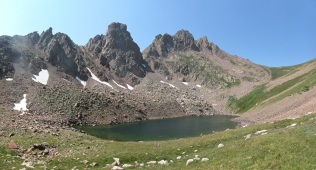 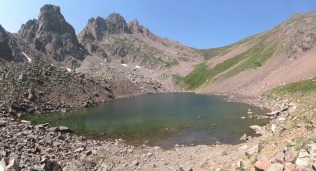 The wildflowers, supposedly past prime, started up in earnest in the large meadows in the last mile to Deluge Lake and didn’t let up until well past Gore Lake. Combined with blue skies and the typical surprising ridges and towers of the Gores, this became almost annoyingly beautiful. We’d stop, take a bunch of pictures, put the cameras away, and turn to go, only to find another set of jaw-dropping wonder a dozen yards later. We got camera fatigue, beauty shock, and perversely desiring something besides non-stop breath-taking beauty.

The Snow Pass circuit is highly recommended. 14 miles with 4500’ of gain. A little route-finding is required, but nothing terribly complicated.  We didn’t scale Snow Peak from the pass, but it looks like a moderate bit of scrambling and careful route-choosing would get it done pretty easily.