Red in Peak and Claw

Pretty pleased with myself on Red Peak.

I’ve been fascinated with the Gore Range ever since… well, forever really, whether I knew it or not.  It’s hidden in plain sight from I-70, Vail, and much of Summit County, but there are no 14ers or popular trailheads in there, so people tend to ignore them.  There may also be dragons.  Two summers ago, I finally (on my third attempt) made it to Eccles Pass and saw the astonishing flowers and scenery up there.  I opted not to climb the amazing-looking Red Peak (13,179′) just north of Eccles because I was too busy reveling in the amazing flowers at the time.

But this year… Amy and I teamed up for an ambitious through-trip of the Gores from Vail to Copper by way of Red Buffalo and Eccles Passes with a side-trip up Red Peak.  Other peaks and passes if the spirit moved us.  We started with seven miles up the Gore Creek trail from a small trailhead in Vail.  Serious terra incognita.  Beautiful, but very very wet.  Loads of rain the night before had left everything drenched and we were soon soaking wet from the waist down due to foliage and grass along the trail.  When we finally achieved some meadows at 11,000′ and burst into the sun, we shouted with joy at the chance to get warm finally.

Early morning in the early miles of the Gore Creek 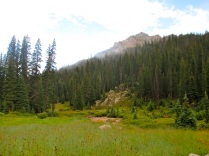 Nice views on the way up to Red Buffalo Pass

Finally in the sun in the upper parts of the Gore Creek trail. Maybe we can warm up now.

The climb up to Red Buffalo Pass was short and sweet and ridden with views that just kept getting better.  From Red Buffalo, we doubled the views (now to the east as well) and started up the tundra toward Red Peak.  The tundra quickly gave way to talus of varying degrees and it was an arduous climb, first to the unnamed sub-summit at 13,006′ on the ridge line, then down to a saddle and up the steep summit cone of Red Peak itself.  Stunning views to the north. 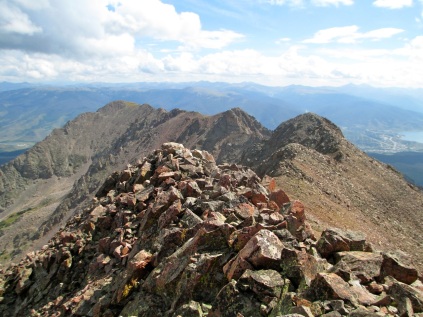 Great view of the passes from the peak. 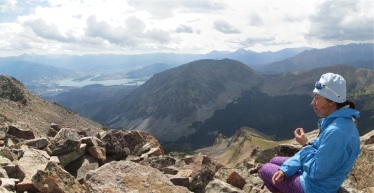 Amy on the summit, looking south. 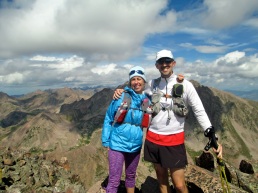 Awkward! I swear, I’ve never met this guy before today.

Another pair of runners arrived shortly afterward and we teamed up with them for the descent.  Rather than retracing our steps up the talus of the ridge, we opted for a direct descent down scree into the valley below.  This turned out to be a terrible idea and lead to about a mile of heinous talus-hopping before we finally managed to scramble back up to the ridge and the relatively easier terrain back to Red Buffalo.

Blissfully back on-trail, we were several hours behind schedule.  Storm clouds were building and I was feeling pretty bonked.  We scooted up and over Eccles Pass (still gorgeous, though somewhat less so this late in the season), and down into the Meadow Creek drainage.  Turning south once again, we followed the Gore Range Trail for several miles into the very steep North Tenmile Creek valley.  Instead of committing to another eight miles and another few thousand feet of gain, we called it quits, ran out to Frisco, and hitched a ride five miles down the interstate to Copper Mountain and my car.

A view back up the tallus toward Red Peak. It looks like a much better idea from the top than from down here. 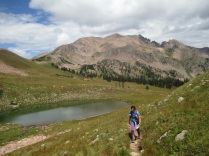 Familiar territory in the upper Willow Creek basin between the two passes. Red Peak behind.

This was meant to be the big highlight of my summer exploits.  Mileage-wise, it was “only” 18.5 miles, not the 25-ish I’d planned.  Nor did I feel like I ever really hit my stride as I have in late-season mountain runs in years past.  But Red Peak was *hard*.  Worth it, but it took a lot of effort and a lot of time and the Gore Creek trail was steeper and rockier than I’d expected as well.  However, the magnitude of a run can’t be judged on mileage or elevation gain or anything like that.  This was easily the best scenery and most compelling mountains I’ve been in this year and by that metric, it makes it the pinnacle of my summer.  Now I can relax a bit, enjoy the end of summer and lack of big plans looming over my head, start thinking ahead to the fall and winter seasons, and maybe cut down my frequency of alpine starts for a change.  That would be nice.

GPS or it didn’t happen, bro.