Spectacular cliffs along the Barton “Creek”

When I was first planning my work-related visit to Austin/College Station, I sent out an email to the Boulder Trail Runners email list (several thousand people) asking for suggestions on ways to occupy myself for half a day in the area.  I ran the lovely Town Lake Loop back in 2008, but was looking for something a bit more amibitious and wild.  Quite a few people responded, but they all boiled down to “Go run the Barton Creek Wilderness“.  Seven miles of trail running starting in the heart of Austin?  That’s a no brainer!

After a pell-mell drive across two hours of Texas (which isn’t much as Texas driving goes), parking, and thrashing around through half a mile of construction sites, I found the correct trailhead and finally got started.  As reported, the trail wound through trees past a nice variety of  limestone cliffs along the bone-dry Barton Creek.  According to the maps, we were still in the heart of the city, but it definitely felt at least 50% wilderness in most places.  The trail was just technical enough to keep things interesting, but I could still eat up miles at a relaxed and exploratory pace.

A short stretch of Very Interesting trail at about mile 4.  The chains were a nice, though unnecessary today, touch.

Things started to get interesting after a couple nice miles through woods and meadows.  Occasional rock gardens and “creek” crossings added spice and there was even one quarter mile stretch at about mile four where the trail took to a narrow shelf under overhanging cliffs with via ferrata-style chains bolted to the side.  The chains were totally unnecessary today, but it was still a nicely spicy trail.

Even for a Tuesday morning, there were quite a few other people out: runners, hikers, mountain bikers, and a couple collections of climbers working on the bolted problems on the right-hand walls.  Shortly after the shelf trail, I met a local runner named Darryl and we ran together and chatted for another two miles up the creek before he turned back. 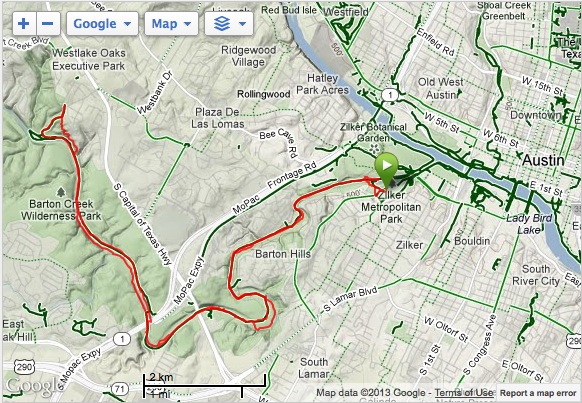 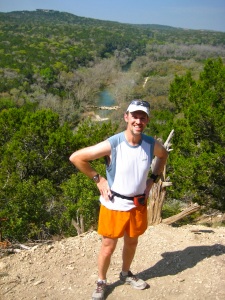 Great viewpoint near the turnaround. Who would guess that this is only a few miles from the state capitol?

The day was getting on but, with only another mile and change to the far end of the trail, I was bound and determined to make it all the way now that the Barton Creek Wilderness was finally seeming more wild than urban.  After a very surprising and steep climb of about 300′, I reached an unassuming neighborhood access point at mile 7.5 and turned for home.

As much fun as this had been, it was still getting hot and I had a plan to catch in a few hours.  Time to head for home as quickly as possible.  Still, I couldn’t resist a detour on the way back down that paralleled my track along the creek, but on the cliff tops instead.  Great views and a scrambly, precipitous descent to the creek. 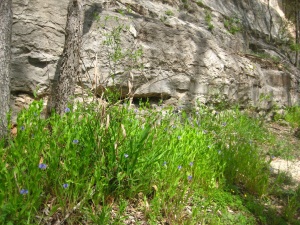 Little blue flowers everywhere along the trails. Definitely don’t have that at home quite yet!

Once I hit double digit miles, I was officially getting into Early Season Long Run territory.  Did I mention the heat?  Yeah, I’ll blame the heat.  Also dehydration.  The last three miles were definitely grit-the-teeth and git-er-done territory and I arrived back at the car sore, salty, and definitely ready to subject my fellow United Express passengers to my smelly self.

It was a really nice, 16 mile run in a new and different place from my usual haunts.  Despite the seeming simplicity of the trails from the official map, it turned out to be quite confusing.  There were many side trails and branchings.  Of course, that just means there’s plenty to explore next time I’m in the area!