Glen Delman’s awesome skills make me look much more awesome than I felt at mile 22.

I secretly relish the feeling of fatalism you get standing on a starting line just before the gun goes off.  Whatever training, whatever gear, whatever pre-race rituals I have or have not, that’s what I’ve got.  The only way out is forward.  The only question is whether it will start to suck later or sooner.

In this case, starting to suck sooner was the more likely scenario.  When I signed up for the 25 mile version of the Fruita Trail Running Festival last fall (formerly known as the Spring Desert Ultra), I’d blithely rationalized “I’d love to run an ultra next summer, but I’m going to be super-busy with teaching and a new baby.  However, training for a marathon should be no problem.”  This was, in retrospect, optimistic.  I got in a couple nice runs in the weeks prior to the race, but only three of them were over ten miles in length.  As they say, “if you can’t be well-trained, you can at least be well-rested.”  And if you can’t be well-rested either, at least go out there and have fun.

Fruita has both 50 and 25 mile options; the former being simply two loops of the latter.  Everyone says that the first loop is “great” and the second (run in the reverse direction) is “unnecessary”.  And they were right about the first loop.  We started off running east down a gravel road before transitioning to some surprisingly technical singletrack at about mile 1.5.  This Moore Fun loop climbed steeply up a ridge line, then scampered along some spectacular cliff-tops with a nice view of the orange-lit Colorado River Valley.  At mile three, we started a long, winding (still very technical) descent where the trail was, in places, pretty hard to find at all.  Awesome!  I always do better on the really technical stuff. 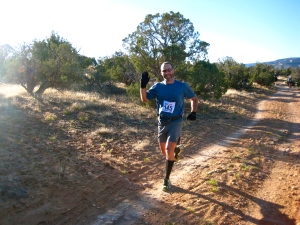 Jason, the main reason I had such a good race.

The weather was perfect and I was happy in my sleeveless shirt and “utility belt” waist pack.  Then again, it was only 7:30 in the morning.  In another few hours it would be pretty brutal.

Rolling out of the first aid station, I hooked up with a guy named Jason from Austin, TX.  We both suffer from the terrible condition called “flapping jaw” and we jabbered along enjoying the rolling terrain and anxious to see what came next. 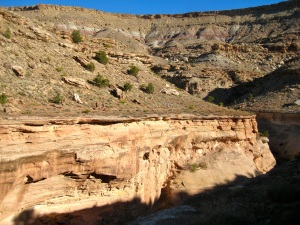 Those runners are about a mile ahead of us.

After a few pleasant but forgettable miles of desert running, we got to the good stuff–a winding trail atop some sandstone bluffs above the Colorado.  When a side canyon intersected the main one, we followed the canyon rim in and then back out to the main canyon.  At one point, I could shout to some friends across no more than 200′ of air on the trail ahead, but it took ten minutes or more until we’d reached the same point.  It was spectacular! When that was over, we made a short, steep climb and ran back across the head of the side canyons, but a hundred feet higher up.

Passing the canyons again at the second level.

So far Jason and I were keeping an honest pace and our conversation was motivating enough to compensate for my lack of conditioning.  Still, I was glad to see the half-way aid station appear at 2:24.  This was the first serious race I’d done where I had no specific time goal.  I get anxious if I’m trying to hit a time goal, so I’d set a very conservative sub-six hour finish as my let’s-keep-it-fun goal.  Privately, I was hoping to finish by noon (5:30), but no biggie if that didn’t happen.  We reached the crowded half-way aid station in 2.5 hours… gosh!  That was on-pace for a sub-5-hour finish.  Cool!  Expectations were readjusted, but performance-related stress went up as well.  It is a race after all.

I was racing entirely on my own supply of Vi Fuel, but gratefully restocked the water bottle and grabbed a handful of chips before heading out.  Another gradual climb (walking) and we looped over the tops of the canyons again at a higher level still.  Then into the Troy Built loop.  Now I was into the familiar endurance phase of the race; if it was going to suck, if I’d gone out too fast, if I was poorly conditions, it would become apparent now. 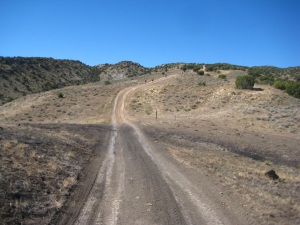 The long climb out of the Troy Built aid station (mile 19). No, it’s not more interesting than it looks.

For a few miles, the trail was pleasant enough, but lacked the real grandeur of the trail along the river.  Plus it was getting hot.  Jason and I still maintained a decent pace and started to think about our end-game.  I’d been taking my Vi religiously every 30 minutes and my energy levels felt nicely even.  In fact, I was pretty stunned at how good I felt, considering!  Even the heel pain I’d been having since early in the race from inadequately-broken-in shoes hadn’t gotten any worse.  We were still passing people left and right, but both Jason and I were out of water by the time we rolled into the last aid station at mile 19.

Time for the final push in to the finish.  The course profile showed the second of two significant climbs here and I was hoping that I’d make it to this point before things got tough.  This climb was no joke; a steep, straight climb up a jeep road in the fierce sun.  After a mile of climbing, the slope eased, but we still hadn’t reached the summit.  Time after time, we’d round a corner and find another short climb. 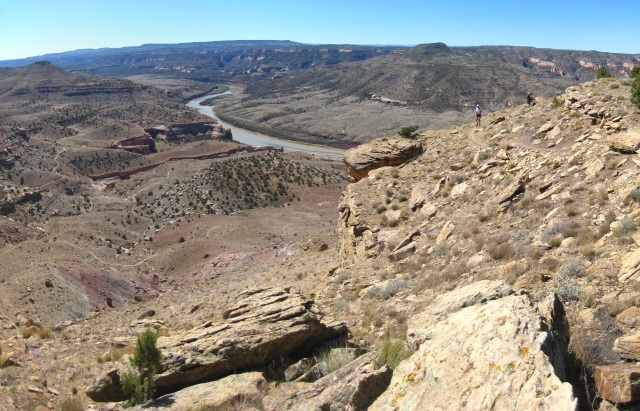 Awesome trail at the top of Mack Ridge (mile 22).

When the top arrived at long last, it was spectacular!  We looped over the top of the canyons yet again, but nearly a thousand feet above them this time on the top of Mack Ridge.  I began to think about how hard to push when.  Jason counted off the miles on his GPS.  I knew we had to get off the ridge, but it showed no sign of descending at mile 22, or 23.  How are we getting down?  Parachutes?

When the descent finally came, it wasted no time.  I lost Jason for good on the ridiculously technical, steep descent.  Perhaps it’s his heat training in Texas or just general superior level of fitness, but he pulled slowly away from me.

Despite being pretty chipped, I reached the gravel road remarkably quickly and started the short jaunt back toward the finish.  “Was this really so steep on the way out this morning?  Was it really up hill?  Where the hell is the finish line?  Oh, crap!  There it is way out there.  Oh man.  Was it really down hill this morning, ’cause it’s sure up-hill now!  Oy!”

Despite my resolution to run it in, I caught myself slowing to a walk in a couple places.  All in all, I’d done far better than I’d expected.  I was on track for a sub-five-hour finish pretty easily and the last mile of any run tends to be the worst.

Finish line buzz. Co-pacing is the best kind of racing.

A hundred yards from the finish, it was clear I’d finish nicely below my revised goal… then the massive thigh spasms struck.  With everyone clapping and cheering, I stopped in my tracks unable to straighten my right leg.  Nooooo!  Visions of Brandon Stapanowich’s hands-and-knees finish at the Boston Marathon filled my mind.  After a few hobbling steps, things got better and I managed to trot in in decent style.

So, that went a lot better than expected!  Trained or not, I turned in a pretty satisfactory time.  I owe a lot of it to Jason’s pacing.  Having a like-minded person along to keep me honest, distracted, and motivated made a huge difference.  Many thanks to Reid for organizing a really swell race on a great course.  I generally don’t like doing races twice, but this one I might well consider doing again.

Monument Canyon in Colorado National Monument. Not a bad place to stretch the legs on a Friday evening. 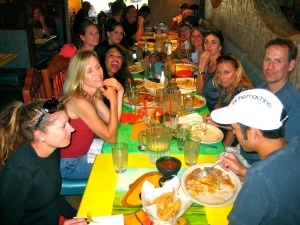 Race recovery of the best sort.

It wasn’t all about the race.  Just getting out for two nights “on my own” was wonderful.  I went for a nice afternoon trot through Colorado National Monument on Friday afternoon to stretch the legs and explored the just-outside-Fruita Dinosaur Hill (fantastic!).  After the race, I hung out with lots of people at the finish line, then again for huge quantities of Mexican food at Fiesta Guadalajara.  Met lots of new friends, saw some new trails, had myself a rather nice little run.  I’d call that a successful study break!

Monument Canyon in Colorado National Monument. Not a bad place to stretch the legs on a Friday evening.

Jason, the main reason I had such a good race.

It’s hard to feel tired with trail like this! 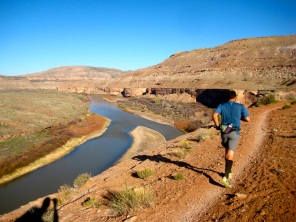 Those runners are about a mile ahead of us.

Passing the canyons again at the second level. 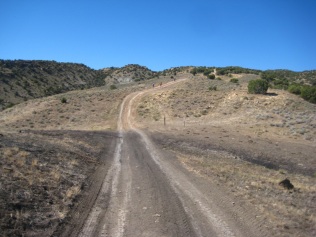 The long climb out of the Troy Built aid station (mile 19). No, it’s not more interesting than it looks.

Awesome trail at the top of Mack Ridge (mile 22).

Jason, finally at the top of the long climb.

Finish line buzz. Co-pacing is the best kind of racing.

Glen Delman’s awesome skills make me look much more awesome than I felt at mile 22.

Race recovery of the best sort.