Back in our carefree, single days, Amy and I took a couple of really memorable fall foliage trips to more the West Elks and San Juan mountains.  Now that Joe is a precocious and energetic three, we decided to try again with a big fall trip, substituting a condo for camping and short hikes for more ambitious goals.  Crested Butte is always beautiful and we figured it would be a good base of operations for 2011 version of the Fall Classic. 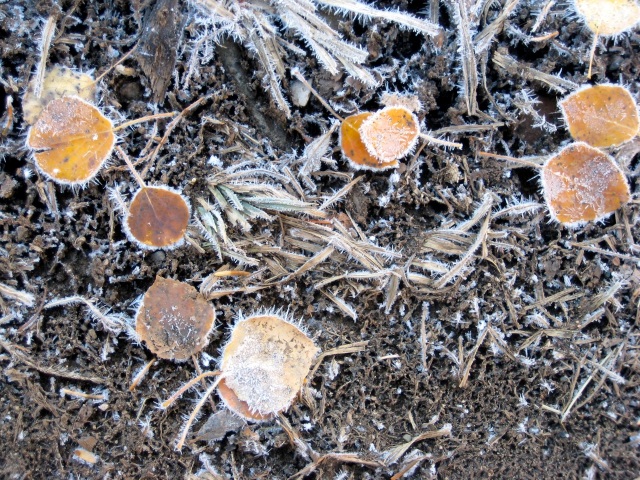 Sadly, we were a week or two late for peak foliage in Crested Butte.  Most of the local trees were already bare and the few patches of color here and there were more muted than in past years.  But it was still a good time.  Several recent storms had dumped a bit of snow in the high country making the peaks nicely frosted against a blue sky. 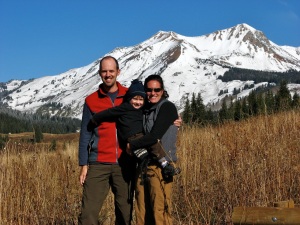 The Family with Bellview Mountain. 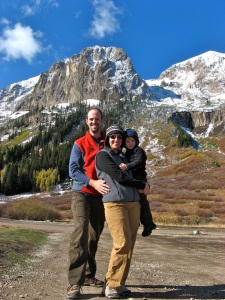 The Family with Gothic Mountain.

Sunday morning, we drove up to Gothic and hiked the mile out to Judd Falls.  We found a few patches of good color up there and admired the impressive Gothic Mountain and more distant Bellview, both with a heavy dusting of snow.  Joe had a great time hiking most of the one mile of trail under his own power, breaking ice on puddles, jumping from the big rocks, and throwing the smaller ones.  The highlight of the falls was the skeletonized cow near the overlook and he spent most of the trip back talking about the cow bones. 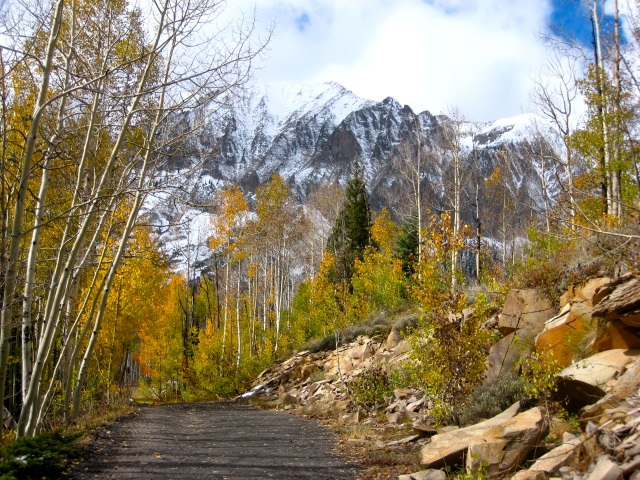 The trees were mostly past-peak, but it was still pretty nice. 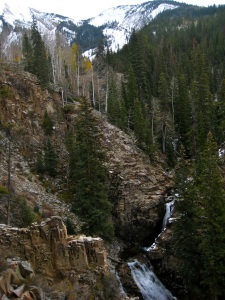 I swear, we don't teach him these things!

On Monday, we drove up Slate Creek Road on a whim and managed to find the really very pleasing Blue Spruce Falls.  There weren’t many aspens, the whole area was lovely and autumnal; the falls were set in a grove of spruce with steep, snowy mountains beyond.  Highly recommended for a short-but-sweet hike.

On the way home, we drove up and over Ohio Pass.  The north side was a little exciting in the low-slung Honda on a couple inches of packed snow, but on the south side we finally found the sea of aspens we’d been looking for.  It’s a very dramatic valley ringed with steep mountains and presided over by the towering Castles of the south-westernmost Elk Mountains.  This was another highlight for Joe and we had a lengthy discussion as to whether dragons still lived in the rock castle or if knights had kicked them out yet.

The impressive Castles in the West Elks near the top of Ohio Pass.

The drive home was long but pretty.  It’s been a long time since we got out farther afield than RMNP or Summit County and I’m reminded of how big and varied Colorado is.  Some may say that mountains are mountains, but the Elks have a very distinct feel from the Sawatch from the Front Range peaks.  Beauty is the stuff of life and variety is the seasoning.