The Fearsome Foursome at the Saddle.

Last year, I was in awesome shape.  I was in awesome shape because I was doing big mountain runs every weekend.  I was doing big runs because I was training for an ultra.  This year I’m not, ergo…  Still, July is the traditional month for peak-bagging and big, stupid “runs” in the mountains, so I assembled a group of like-minded folks and set out to explore the eastern side of the Mummy Range in Rocky Mountain National Park.

We started up the Lawn Lake trail at a relaxed pace.  After an initial mile of steep climbing, the trail levels out and rises gradually along the eastern side of the Roaring River.

Even with the higher-than-usual water levels, we were in no danger of flooded trails; the Roaring River flows through a deep canyon carved out one October morning in 1982 when a dam on Lawn Lake broke sending huge quantities of water, boulders, and trees scouring down the valley.  Based on the scale of the destruction still visible three decades later, it must have been utterly devastating!

Lovely Lawn Lake. The Saddle and Hagues Peak are in the distance.

In two hours, the views opened up nicely and we reached Lawn Lake.  Despite its tragic history, Lawn Lake has been on my list for years now and has somehow never risen to the top until now.  And this is a shame!  Lawn Lake and it’s setting of 13,000′ peaks is stunning.  Wildflowers and snowfields ring the place along with a nice mix of bare rock and grassy swards.  Except for the mosquitoes, it would be a great place to kick back and do some serious relaxing. 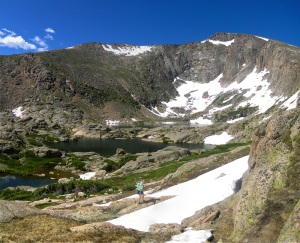 But relaxing wasn’t on our schedule.  The next stop was Crystal Lake, 500′ higher in a cirque below Mt. Fairchild.  Though Lawn and Crystal Lakes are similar in size, the similarity ends there.  While Lawn is bucolic and pastoral, Crystal is jagged with rocks and a good deal less inviting.  We scrambled up some snowfields and rocks to the tundra ramp above, then trudged through glorious flower meadows to the broad plateau between Fairchild and Hagues Peak known as the Saddle. 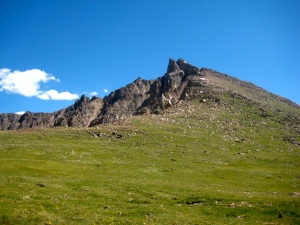 The Saddle has it all: wildflower meadows perfect for cavorting, spectacular vistas of distant peaks, and jagged, towering cliffs.  A quick conference adjusted our sights on the aforementioned towering cliffs which make up the west fact of Hagues Peak, the summit of which was 3/4 of a mile distant and 1200′ above.  Even in the best of conditioning, the southeast ridge of Hagues Peaks (adjacent to the many-times-cited jagged cliffs) would be good exercise, but in my relatively weak state, they were a real leg burner.  Fortunately, the views only improved as we got higher, so stopping to gasp for air was no shame.  The going evolved from steep tundra to moderate talus, to rather sporting scrambles over large blocks with some route-finding.  Probably it could be kept to class 2 hiking with a couple obligatory scrambles, but none of us tried very hard to find the easiest path. 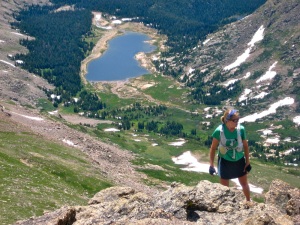 Forty five minutes after leaving the saddle, we topped out on the 13,560′ summit of Hagues Peak.  This is the fourth highest summit in RMNP, the highest in Larimer County and the highest this far north in Colorado.  Accordingly, the views were superb.  I got to gander the Rawah, Never Summer, and Snowy ranges, the elusive Rowe Glacier, and lots of other things I’ve only ever read about in books.  This was a whole new realm of the Front Range to me.

Ben doing some optional scrambling near the summit.

Downclimbing the ridge we’d come up didn’t seem much like the fun kind of exciting, so we scrambled for a little bit along the gentle ridge running east to Mummy Peak before dropping down small talus and scree to a steep, flower-strewn meadow and thence back to 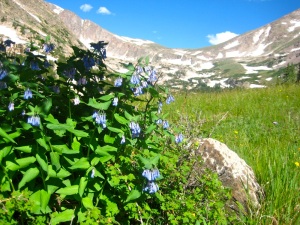 the trail at 11,500′.  Two thousand feet of steep descent, while beautiful, left my legs rather jellied, and I was glad to get back to the trail and start the running in earnest.

Without much ado, we pelted back to Lawn Lake and then hit the six miles of easy trail back to the car.  What had been a spirited hike on the way up turned into a heart-and-leg-pounding, semi-technical descent.  Was the trail really this rocky on the way up?  Last year, this would have been joyous and carefree (and quite possibly only the first half of a higher-mileage day), but this season, it turned into a bit of a slog for the last three miles, despite the easy downhill grade.

Back at the car, we cooled our heels in the river at the popular Alluvial Fan (a product of the 1982 flood), and retired to Estes Park for ice cream.

What a fantastic trip!  The weather held, the route was varied and the scenery spectacular and new.  The company was kindred, and we had a fantastic time, start to finish.  While Amanda, Ben, and Eric are all in ultra-shape this season, 18 miles with 5000′ of gain is the biggest day I’ve had (by a factor of two at least) since October.  It’s gratifying to know I can still pull something like this out if I need to, but walking over the next week was a constant reminder of my lack of training.

Our first view of the high Mummies half a mile below Lawn Lake.

Lovely Lawn Lake. The Saddle and Hagues Peak are in the distance. 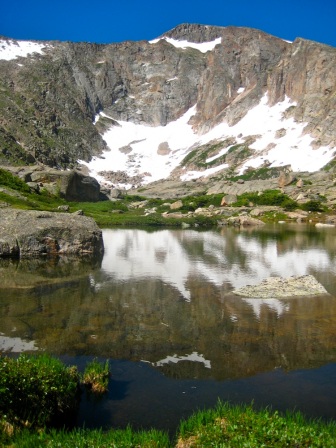 Crystal Lake hides in the cirque below Mount Fairchild 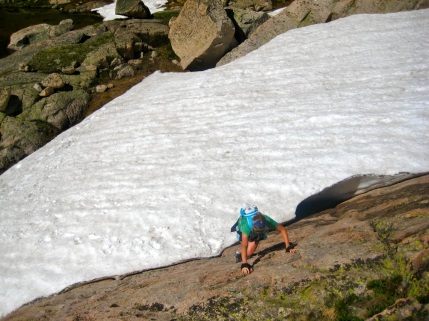 Amanda’s first mistake was following me on a mountain “run”. 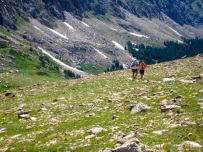 Ben and Eric power up the slopes toward the Saddle.

The Fearsome Foursome at the Saddle. 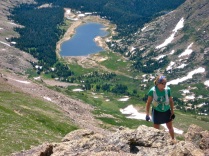 Ben doing some optional scrambling near the summit.

The elusive Rowe Glacier from the north side of Hagues Peak.