Two weeks to go. After last weekend, I’m well into my taper both mentally and physically. But it is a taper, not a complete cessation of all running activities. The summer is also tapering and the days of snow-free trails in the high country are clearly numbered. Time to take advantage of my conditioning and the remaining fine weather to tick off a few things from the 2010 To-Do list.

Two such items that have been nagging me for years are Shoshoni Peak and Mt. Toll above the popular Brainard Lake in the Indian Peaks. Bagging them both would be about twelve miles with 3500′ of elevation gain (more or less), much of it even on trail! No problem!

Shad and I met up at the leisurely hour of 7:30 and were on the trail before 9am enjoying the last dregs of summer. The trip up to Pawnee Pass was fast and easy though the wind up high was bracing to say the least. From the pass, we turned south and picked our way through half a mile of rather heinous, loose talus before finding another half mile of glorious level tundra with stunning views on all sides to the minor point at the end that marks the summit of Shoshoni. 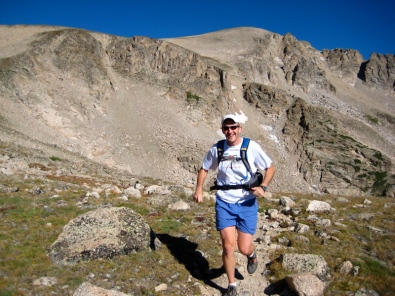 The view from Shoshoni of Apache and Navajo to the south.

South of the summit, the ground drops away in a complicated series of cliffs and towers. And even better, the actual summit is on a semi-detached pinacle surrounded by a thousand feet of air on three sides. The view stretches from the Isabelle Glacier a thousand feet below up the Queens Way to the saddle-shaped Apache Peak, conical Navajo, and many more besides. Wow! 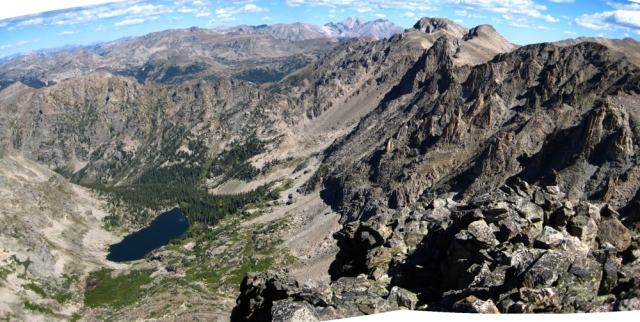 Spectacular views to the west of Pawnee Lake

We found a less gnarly way through the talus back to the pass, then climbed the Pawnee Peak, the main characteristic of which is that it divides the two drainages of the Brainard Lake region.

Mt. Toll is a very distinctive peak and can be seen from many angles from a great distance away. We dropped into the Toll-Pawnee saddle (broad and red with early-autumn vegetation), then climbed the increasingly steep, rough slopes to the summit. Despite Mt. Toll’s visibility, it clearly isn’t climbed as often as it should be. The summit is compact and airy and features jaw-dropping 360 degree views. The lighting was superb and we soaked in the joy of place for a nice, long time. 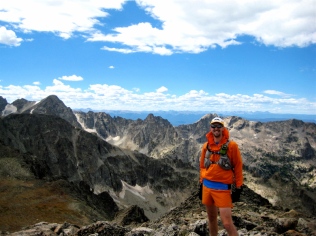 Mt. Toll dominates the view from Blue Lake. The opposite is not true.

Finally, we were faced with a dilemma. Climb 500′ of nasty scree back to Pawnee before descending on the rough trail, or descend 1000′ of nastier scree straight to Blue Lake and see something new. The choice was obvious: if both are nasty (in a purely relative sense of course; we were both deliriously happy to be where we were) take the one that lets you see something different. We picked our way down the steep slope to the benches above Blue Lake, found our way through some minor cliff bands, and finally emerged at the trail. The three miles back to the car were technical and rough, but downhill and fun.

It was a great way to finish off the running season and it was great to go into the mountains purely for their own sake. Both Shoshoni and Toll were incredible, aesthetic peaks and I can’t believe it took me so many years to add them to my list.

This entry was posted in running. Bookmark the permalink.