Getting in an early run always makes me feel great for the rest of the day, so I decided it would be a good idea to get up extra-early, do a moderate run in the mountains, and then go in to work in the afternoon. The 18 mile out-and-back on the St. Vrain Glacier Trail in the northern Indian Peaks has been beckoning for a while, and I figured I could bang it out in a reasonable four hours. Start at 6, back by 10 or 11 at the latest, back in time for lunch at work.

Of course, these things are never as simple as all that…

A trio of bull elk I startled on the St. Vrain Glacier Trail. 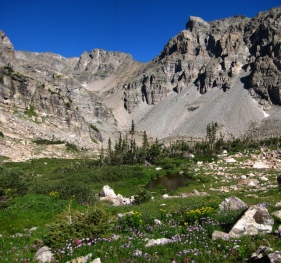 Dp I really have to go back home?

I didn’t hit the trail until 6:30, but made good time up to the Beaver TH (reachable by 4×4 only). From here, I made the decision to drop down into the valley and head west rather than follow the more circuitous route past Red Deer Lake (maybe on the way back…). Still feeling good, I hit the St. Vrain Glacier Trail at mile 5 and started the climb in earnest. It was clear and chilly in the shadow of the substantial northern wall of the valley and I was in terra incognita, just the way I like it.

Things rapidly got gorgeous, and I do mean gorgeous! The late-summer wildflowers adorned the meadows purple and yellow. The St. Vrain creek ran alongside the trail and the impressively craggy Elk Tooth and Ogallalla Peak stood out in the brilliant morning sun. I rounded a corner and saw a trio of buck elk standing on a flower-strewn slope in the sunlight looking all proud and noble. Of course, by the time I managed to get my camera out they were looking more frightened and fleet-of-foot. 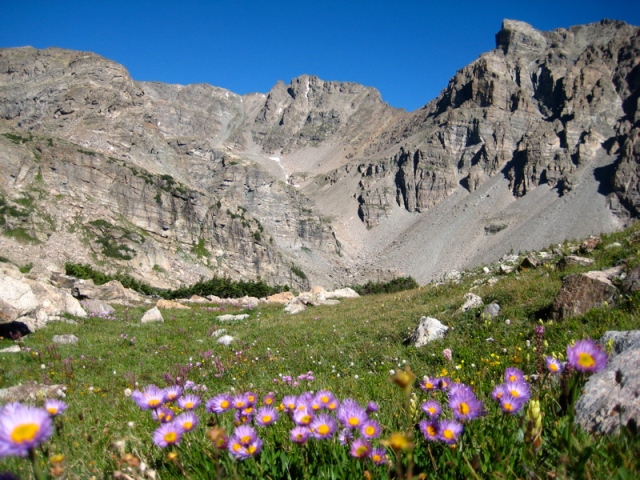 The impressive Elk Tooth above the valley.

The trail became very hard to find once I hit treeline, but I knew roughly where I needed to go and followed a ramp up to the left headed for Gibraltar Lake. Gorgeous. Windy. Awesome! By the time I finally saw the lakes, I was far above them on my way to an unnamed rocky tor, so I continued to the summit and took in the views. It was incredibly windy at 11,400′, but I had an astonishing view of the Gibraltar Lakes (there are three of them, it turns out) below, surrounded by steep cliffs and glaciers on one side, and wicked talus slopes leading up to the more substantial crags of Ogallala and Elk Tooth on the other.

My schedule quickly went out the window and I spent the better part of half an hour poking around and exploring before reluctantly turning for home. What had been a moderate climb on the way up the valley turned into a great speed-fest of trail running on the way out and I made great time, sweating in the sunshine this time rather than shivering in the shadows.

Back at the 4wd road, I elected to continue on the “road” down to Camp Dick, then find my way back to the car via the short connector trail between the two trailheads. The road turned out to be one of the roughest, most technical trails I’ve ever run on and any illusions about being able to drive up here in my Subaru rapidly were disabused. And the connector trail turned out to be a rather steep climb through dense forest… in which I took a wrong turn and added at least two miles to an already long day, so it wasn’t until 12:30 that I made it back to the car.

Oh well, it’s not like I would have gotten anything useful done at work on a Friday afternoon anyway…

This entry was posted in running, solo. Bookmark the permalink.