(Most of) the Longs Peak Radical Slam

Many mysteries about Longs Peak have been resolved, but I am left with three questions:

I’m fairly sure that Roach proposed the Radical Slam as a joke.

There are, however, a number of us take such wild suggestions seriously. That number shrank from half a dozen at the outset to just two of us toeing the line on Saturday morning to test our mettle. Mike has been training hard for the Leadville Trail 100 and has been burning up the miles and bagging big, difficult peaks all summer. I’ve been having fun this summer, but am not in nearly the shape he is.

We bivied at a trailhead on Friday night hoping to get a generous three or four hours of shut-eye but, between the bright moon and pesky mosquitos, got a maximum of an hour’s sleep. Midnight found us restless and unlikely to salvage much more sleep out of the night, so we figured we might as well get on with it. Rolling into the trailhead at 1am, we were unsurprised to find only a small handfull of parking spots available. In fact, even though we were on the trail before 2am, we passed dozens of hikers who’d gotten an even earlier start. Longs is an incredibly popular mountain and with the forecast good weather and moonlit skies, the hikers came in droves.

We were an hour ahead of schedule and we required at least some light to navigate through the tricky upper sections of the Loft route, so we took our time on the way up. The views were amazing above treeline and we managed most of the trail without headlamps. Taking a break at Chasm Meadows, I realized that the true grandeur of a place really becomes apparent when viewed by moonlight: deep blackness on the northern walls and surprisingly visible southern faces. It was really amazing. I also realized it was really really cold at 4am and 13-thousand-some feet with a stiff breeze. I’d dressed in my usual mountain-running togs–short and long-sleeved shirts, thin windbreaker, hat, gloves, and running shorts–but had fortunately thrown in an extra long-sleeved shirt and pair of thin tights and all of these layers were on. Despite wanting to wait for first light before tackling the Loft, we had to keep moving to keep even some semblance of warmth.

First light found us high in the Loft circumventing the impressive cliff bands.

Sunrise over the summit of Mount Meeker.

Mike had been part way up the Loft before and we didn’t have too much trouble finding our way by headlamp up faint trail through the scree in the lower part. The upper reaches got a good deal steeper and required some rock scrambling, some of it actually kind of serious (solid 3rd class, unless we were off-route which is entirely possible). By this point, we could begin to see our surrounds in a fuzzy, black-and-white, pre-dawn way and could pick out the critical ledge heading left and through the cliff bands. A few dicey moves got us to the ledge and we waltzed up to the Loft without additional trouble.

It was now fully daylight, but the sun didn’t make it any warmer. We shivered our way to the top of Meeker (one down, six to go!) in an easy trot from the Loft, marveled as the sunrise painted everything a brilliant orange, then shivered back down. Staying warm by constant movement wasn’t cutting it anymore. My thin gloves and jacket were definitely not enough (note to self: zip-off pants, approach shoes, real jacket and gloves next time).

Next up, more terra incognita for both of us. We followed a faint path to the western edge of the Loft and started losing altitude guided by some cairns. The going went from a broad slope littered with loose scree to very steep gully littered with loose scree. If it weren’t for the cairns and the fact that every other option looked worse, I’d have sworn we were off-route. Downclimbing a steep rocky buttress (class 3, minimum), we squeezed between some rocks and dropped into a small platform. Looking back I happened to spy a faint bit of white paint on the rock behind us; the famous Clark’s Arrow that gives its name to this route. 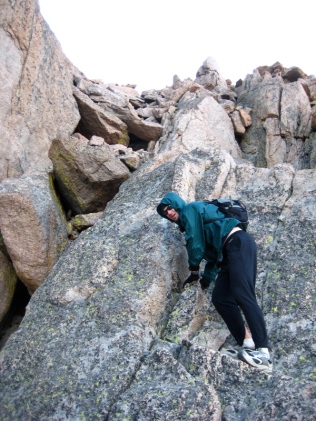 Keplinger’s Couloir, the Palisades, and the Homestretch.

From here, the going got a bit easier. We traversed some mostly level ground and climbed scree up into the upper reaches of Keplinger’s Couloir. To the right were the impressive and aptly named Pallisades and the back side of the familiar Notch. To the left, a set of typical Longs boilerplate slabs curving out toward Chiefshead and Pagoda. Above us we could see… people! Loads of people! They moved slowly from left to right toward the Homestretch, climbing to the summit. We traversed left up some broad slabs and encountered our first surprise of the day: ice! It was only a thin glaze here and there on the rocks, but it was hard to see and potentially deadly. Carefully, we climbed to the Homestretch, got in line, and climbed to the summit: my third visit, Mike’s second.

Incredible view of the Palisades and Mt. Meeker from the Homestretch.

Pagoda from the Narrows looks very far away and hard to get to.

With miles to go and another five mountains to climb, we hurried onward; down the Homestretch and across the Narrows. I’ve been dying to climb Pagoda for some time now and had already been shut down on one previous occasion. It was right there across a ridge holding the amazing spires of the Keyboard of the Winds. The directions said to drop off the ledges and work our way through a “pesky cliff band”, climb the peak, then drop between two of the Keys and traverse over to the Trough. It certainly didn’t look obvious from here, and we were a bit spooked by the wind and ice we’d encountered earlier. Discretion being the better part of valor, I convinced Mike that we should come back for this one later when we had better gear and more of a clue what we were doing. (I’ve since gotten the complete beta from Eric from his excellant trip report and photos.) Abashed, but resolute, we squeezed through the Narrows and decended in to the nasty scree-and-hiker gully that is the Trough (finding that both factors make it a bit harder in the summer than in the winter), across more precipitous ledges and we were finally resting in the sun at the Keyhole.

Plenty of company in the Trough 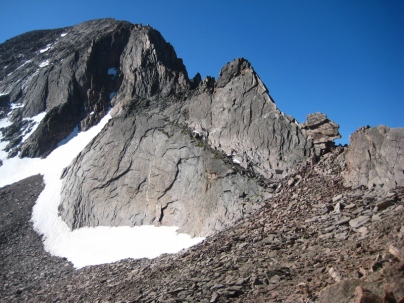 The Keyhole and north face from Storm Peak.

Things changed dramatically here. We were mostly out of the wind and it as getting quite warm. The swarms of people in the last mile to the summit of Longs were nothing compared with the hoards lounging on the east side of the Keyhole and on the rocks down toward the Boulderfield. Having successfully gotten out of the remote and most hazardous portion of the route, we set off for the relatively easy Storm Peak (lots of traversing of massive, shifting talus blocks but fantastic views into Glacier Gorge to the west), then dropped down more of the same to the Boulderfield. A brief bit of trail (lovely, beautiful trail!), and it was back to talus-hopping up the steep but brief climb to Mt. Lady Washington.

This is why you climb Mt. Lady Washington!

Mt. Lady Washington is highly recommended. I’ve had several people ask why I recommend such an unsightly heap of rubble that lies in the midst of such loftier, more picturesque mountains. The view from the summit of said loftier, picturesque mountains explains it all. We reached the top at 11:30 and felt more than a little bit smug about the stupendous views spread out on all sides. 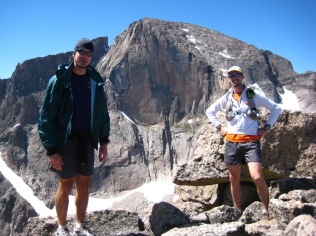 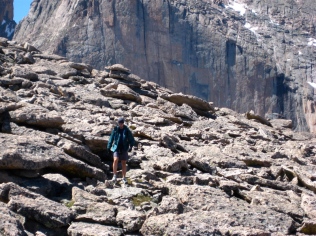 We hiked a lot of talus on this trip.

Four down, two to go. We trotted down talus to the trail again, then got in a quick mile or so of trail running to Granite Pass where we split off on the North Longs Peak Trail for a short distance. Our fifth peak was the unassuming Battle Mountain; really more of a long, low ridge with occasional rocky castles. We scaled the highest of the castles, ticked a fifth summit, and continued. 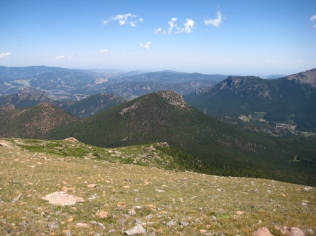 If I hadn’t already insisted on skipping Pagoda, I would most certainly have wussed out on Estes Cone. Standing on the slopes of Battle Mountain, the Cone was readily apparent a mile and a half distant with the summit a thousand feet below. And between us and the summit was Storm Pass, 800′ below that. No trails, of course, just steep bushwhacking through scrub brush and dense forest. Uggg! It didn’t look appealing, but it turned out to be less horrible than we’d feared. The GPS steered us in true and we happily reached good trail an hour after leaving Battle Mountain. The slog up the trail to the Cone was hot and exhausting, but I couldn’t in good concience quit now after only five peaks…

Estes Cone was very different from my last visit. For one thing, it was hot and sunny. For another, the view was spectacular. At first, including the modest Cone in an itinerary of much loftier peaks seemed odd to me, but we realized that this provides a nice cap on the experience. Sitting on the open, rocky summit, we stared west at the mountains on the horizon realizing we’d climbed everything in sight.

The view from Estes Cone. We climbed everything you see here.

Satisfied, exhausted, and purely famished, we turned for home, descended the rough trail to Moore Park, and managed a pretty good run past the Eugenia Mine and down the good trail to the parking lot. We briefly considered the traditional 50 pushups–I even managed five–but then decided we just weren’t radical enough for something like that.

The grand total was 17 miles, 7500′ of vertical, six named summits, hundreds of fellow hikers, one sturdy partner-in-adventure, and countless amazing views. In retrospect, I think this was both a running trip and a mountain climbing trip; Mike calls it “speed mountaineering”. Some of the terrain was full-on rock scrambling fun while other parts were awesome cruiser trails. However you approach it, the Longs Peak massif is huge and baffling and I’m glad to have seen a previously unseen side of it.