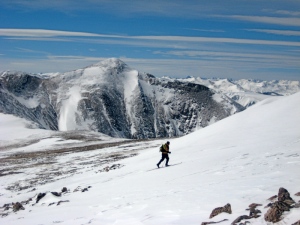 …while I take the less exposed route (photo by Eric)

I’ve been in Colorado for almost six years now which, no matter how you slice it, is a long time. These days, if I want to do something new and different, it usually involves either something very obscure, something far away, or something old but in a new way. James Peak is neither far away nor obscure and I’ve climbed it twice before. But swapping the hiking boots and snowshoes for a set of skis… now that is something new! I’ve caught the backcountry ski bug this season and have been testing myself and my vintage gear on more and more challenging trips. Time for my first ski descent of a major CO peak!

Kevin, Eric, and I met Scott at the St. Mary’s Glacier TH. Eric and Kevin were on snowshoes while Scott and I were on skis, both technically telemark rigs, his conciderably more modern and capable than mine. (The same could be said of Scott as well in comparison to myself.) Snow coverage was stingy down low but we made good time up to the glacier. The weather wasn’t as stunning as we had hoped with some ominous clouds and quite a bit of wind and we were hit with blowing snow and gusty headwinds as we started the ascent.

Eric and Kevin have been tearing it up in the mountains lately getting out more in the last two weeks than I have in the past two months at least. So far, they’ve been shut down on big winter mountains but they were eager to change this. To help in this regard, we paused on the steepest part of the glacier for a quick snow skills workshop: self arrests, glissades, and basic ice axe self-belay. After no more than a couple goes, they’d mastered the head-down, face-up self arrest (the hardest initial condition) and I deemed them graduated from basic training. Plus the wind was kicking up blowing a reasonable ground blizzard straight down the glacier at us and we were eager to get moving again.

The first big climb after the flats (photo by Eric)

The rest of the ascent went without incident. A pair of skiers passed us near the top of the glacier headed down; they hadn’t liked what they’d seen of conditions high up. We however were made of sterner (or stupider) stuff and resolutely tromped across the flats of Jamaica for what seemed like about 12 miles. Snow cover was spotty at best and those of us on skis scraped our skins on quite a few small rocks and bushes. But the farther we got from the wind-tunnel of the glacier, the better weather conditions became.

The second half of the climb was steep and arduous, but the views and weather kept improving. Working around to the south slopes, we managed to stay mostly on snow. Scott and I were in photogenic yellow outfits and took turns modeling for each other. Once we gained the edge of the precipitous east face, the scenery got even better with a good cornice.  At length, we reached the summit, soaked in the views on all sides, felt very smug about the state of the world in general and the fantastic visibility in specific, then, shivering, prepped for the descent. 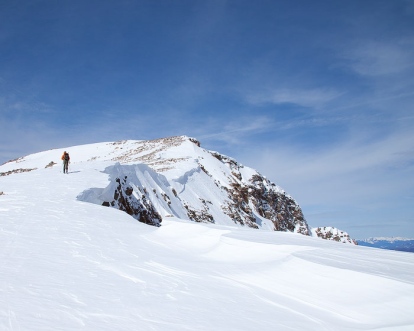 Scott skis the cornice near the summit…

…while I take the less exposed route (photo by Eric)

Fantastic views in all directions. In this case, to the south of Bancroft and Parry with myriad peaks beyond (photo by Eric) 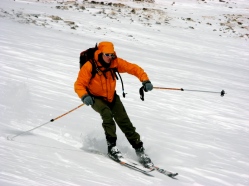 Scott tears it up on the descent

Eric captures me (twice!) as close as I ever get to tearing anything up.

Skiing up was relatively easy thanks to the skins, but the proof was in the descent. I kept my skins on for the first steep slope welcoming any additional friction they might provide. Scott was bolder and deskinned right there on the summit cairn. The top couple hundred feet of snowfield were a bit exciting for two guys who’ve never telemarked before, but a few hundred feet of drop got our ski legs beneath us. I deskinned once the angle subsided a bit and managed a few shaky but servicable alpine-style turns on the broad snowfields coming awfully close once or twice to making it look marginally good. Alpine crud is never easy and the surface varied from pockets of fine powder to wind slab to occasional bits of icy crust. Exciting times. I’d expected to quickly outdistance the snowshoe contingent, but they made steady progress in a straight line while we horsed around taking pictures and (at least for myself) falling a lot.

Significant melting had made the already-thin snow cover on the flats even more tedious and we were very glad to finally get back to the top of the glacier. The upper glacier was exciting due to toothy sastrugi and a helpful tailwind. Lower down, the slope increased but the snow improved to almost the consistency of a resort groomer (definitely my preferred surface).

Scott made it look easy and tore down the headwall to the lake to the admiration of the growing crowd of hikers. I fell down a lot. Pretty much every turn on that steep stuff. Oh well. 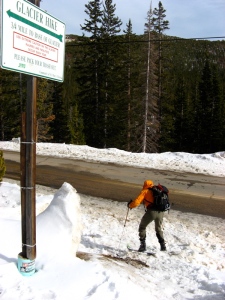 Skiing all the way to the cars, come hell or lack of snow.

We took our time on the last 3/4 mile to the car, but didn’t dawdle all that much. We were resolved to ski the steep, narrow, well-trodden, and rock-strewn trail as far as possible and I managed to snowplow like crazy, dodging sled-toting hikers and dogs. With singing quads, we rounded the final corner, ready to hang out at the cars for an hour or two while the slowshoe contingent arrived… only to see Eric and Kevin had beaten us there by a few seconds! Perhaps skis aren’t all that much faster after all, or perhaps E&K are just studs.

It was a great day for all! Scott and I survived the ski descent and Eric and Kevin bagged their first large winter peak. As far as ski mountaineering goes, this is about as easy as it gets. I survived it, but clearly my equipment and skillset need some work if I’m going to do much more of this. First up, getting some better boots. Anyone got some sturdy 75mm three-pin boots in a size 12-12.5 they’d like to get rid of? Anyone want to teach me how to make a telemark turn? That would probably really help.