Mark and I go way back. Not exactly dawn-of-time back, but he was working at STScI while I was in grad school at JHU. We met at the climbing wall one night and, subsequently, he introduced me to multi-pitch rock climbing at Seneca and to the woman that would later become my wife. We’ve drifted apart recently, but astronomy is a small world and things can only drift so far before they collapse again. Mark was on a 2 1/2 week Colorado tour and we agreed to hook up to “climb some hard 14ers and other adventures”. He left the details largely up to me. [cue evil laughter]

I’m not as passionate about climbing 14ers as a lot of other people, but I’m happy to climb them if they’re interesting. With my recent ascents of Mt. Sherman and Pikes Peak, I’ve completed the 14ers in the Front and Tenmile/Mosquito Ranges, so we’d need to travel farther afield for something new. I’ve also been itching to get out and take some late-summer time in the mountains to unwind from a busy, scattered summer. If said unwinding involved exploring new areas of the state, new mountain ranges, camping, and some challenging routes, so much the better!

While I was satisfied, Mark had flown all the way out here to climb 14ers and Amy had been hankering for a backpacking trip for a while. Thus we got home Friday night, showered, sucked down a pizza, and immediately started packing up again for a more mellow trip. Chris and his brother Andy showed up at 7am and we loaded gear into the cars for the trip to the Horn Fork Basin and Mt. Harvard. I’ve never been to the Sawatch Range or the Collegiate Peaks, so it was another new area for me.

Hiking in on Saturday morning.

After our tough times at Lake Como, we were really glad that the trail from the North Cottonwood Trailhead was smooth and level. We wound through gorgeous forest past a scenic, babbling river with the aspens just starting to turn under gorgeously clear blue skies. After a mile and a half of such buccolity, we turned north and started ascending steadily into the valley formed by the Continental Divide on one side and Mt. Columbia on the other. Chris and Andy located a spatious campsite at 11,600′ just at tree line with a gorgeous view of Mt. Harvard and its unnamed sub-peaks at the end of the valley.

It was still early, so everyone but Amy set out up the valley to see the reportedly-beautiful Bear Lake at 12,300′. We wove our way through willows to the base of a prominent fin, then scrambled up increasingly difficult rock to the flat plateau above. The lake was, as advertised, stunning with deep green waters reflecting the ragged cliffs above.

To the south, Mt. Yale dominates the view.

The return to camp was a bit tougher, but we had a fine time cooking dinner and being social. Chris had, inexplicably, hauled in a pound of frozen shrimp, cans of mushrooms, baby corn, raman noodles, and various sauces, and concocted a really impressive Asian stir-fry that would have fed an entire platoon. Night came and we sat around watching stars for a while. We saw a bright space station pass and and Iridium flare before a thick fog crept in and made everything very photogenic.

Mornings are cold at 11,000′ at the beginning of September! We crept out at 6 am and stood around stomping and puffing to warm up. By 8, things had warmed up a bit as we set off up the trail. After an hour, we were fully hot as the good trail gave way to large talus on a steep bench above Bear Lake. Thankfully, this trail was well marked with tall cairns and we had no trouble staying on-course. 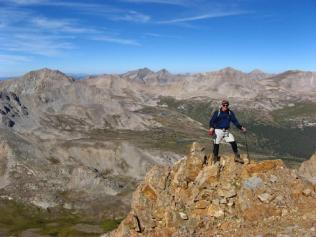 Luna rests on the way up her second 14er.

The climb up to the Divide was steep, even if the trail was in good condition. There were still 2800′ to climb from camp and our legs and lungs protested the continued abuse. I found a really nice spot on the ridgeline at 13,500′ and called for an extended rest. The views into the Missouri Basin to the west were spectacular and we could pick out probably a dozen 14ers on the horizon. After this, it was another long push to the rocky summit. The final hundred feet were especially hard for Luna over slabs of steep rock, but soon the whole party was ensconsed on the small summit at 14,420′. This was Andy’s first, Luna’s second, Amy’s seventh, Mark’s eighth, and my fourteenth 14er. (I have no idea how many Chris has climbed but it’s quite a few.) It’s also the highest point we’ve been on for many of us. Fortunately, Harvard was a lot easier than my previous highest point of only three days before!

Amy, Luna, and Andy on the crowded summit

Mt. Harvard is, however, a summer 14er and not one of the terribly isolated or technically challenging ones. We were quickly joined by another couple dozen people and dogs from all walks of life. Amy, Luna, and I started our descent and were soon joined by the rest of the party. The descent went without incident back to camp where we lounged about for a little while before packing up and hiking back out. Our feet were nicely tired by the time we got back to the trailhead, and milkshakes and burgers at K’s Diner in Buena Vista definitely hit the spot. Three 14ers down. Did we have anything left for a few more?

Mark on the next-to-next-to-last tower on the First Flatiron.

Five days without a break? Time to do some climbing! The Flatirons had been calling to Mark since he arrived and so far his rope and rack had seen no action. We headed out for a mellow climb of the First via Fandango (5.5). I’d climbed this route in the spring with Fabio and Haley and had some ideas as to how it could be “improved”.

This time, we started at the base of Baker’s Way and effectively skipped the first two pitches of Fandango. Mark took P1 and got us above the first roof to a comfy belay stance. I took the second pitch, traversing across and easy slab, then up a complicated gully to a contrived anchor. Leading with Mark’s rack was interesting as he uses a very different organizational system than I do and with a different set of gear. It’s funny how used to a system you get, but adapting was undoubtedly good for me. Mark lead the crux third pitch and was a bit wigged by the lack of protection and spicy moves at the top of the second roof. Despite my protests that he ought to take P4 as well since it is the best of the route, I was stuck leading the fist crack to the ridgeline and the great views of the Indian Peaks.

The weather was great and we took our time in two more pitches along the ridge to the last false summit, then the unroped scramble to the true summit. Gliders soared overhead, tourists snapped photos from the rocks below and we were in no hurry to depart. Finally, however, we rigged the rappel and slid 100′ down to the west bench. A fine end to a fine week of climbing and catching up.