Several weeks of unseasonably warm temperatures and a rampant urban claustrophobia lead to their logical conclusion, namely Mike and I meeting up in the middle of the night in rural New York for another gonzo extended-weekend of backpacking.

As usual, we were nocturnally active.

Thursday — Rendezvous with Mike went better than last time. I left B’more at about 3:30 and, after getting really amazingly lost in the terra incognita around the state line in northern Jersey, arrived at the trailhead at ten of ten. Mike arrived shortly thereafter from Conn. and we headed out for High Point. A now-traditional stop at Dunkin Donuts (if you do it once, it’s a tradition, right?) prepared us for the stiff winds and cold temperatures we found there. We reached the deserted parking area, suited up and headed out into the blustery, star-encrusted night headed ‘north’ on the AT–though in fact our general direction of travel was roughly south-east.

The climb up High Point warmed us quickly. We passed an observation deck but avoided the actual summit monument in the interests of temperature and fatigue. A half-mile of descent brought us to the adequate High Point Shelter where we crashed for the night and slept soundly.

The High Point Monument could be seen in the distance marking the trip’s starting point. Here we can see it from Pochuck Mountain in the late afternoon.

Friday — We were up early and, after packing up, ran back up to see the actual High Point. New Jersey is so proud of its highest point of land (at 1803′) that it has built a 220′ tall obelisk on the summit, illuminats it at night and surrounds it with a lovely state park. The view is great with a 360o panorama into three states. We could see the entire Kittatinny Ridge we’d walked down two months ago. The winds were still ferocious but the sun was out and things looked promising. 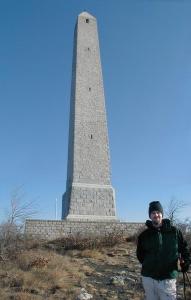 Returning to our packs, we made good time descending from the ridge. This is one of the regions where the AT crosses from one parallel ridge to the next. For much of the rest of the day, we walked through pleasant farmland and light woods. Old stone foundations and rock walls showed where old farms once stood. Thankfully, these industrious farmers had removed all the rocks from their fields for building material and thus our path was level and even. We climbed a number of styles over more modern fences and skirted frozen ponds. Lots of roads were crossed and our spirits were generally high. From each ridge and open field, the High Point Monument could be seen getting progressively smaller and smaller with distance. 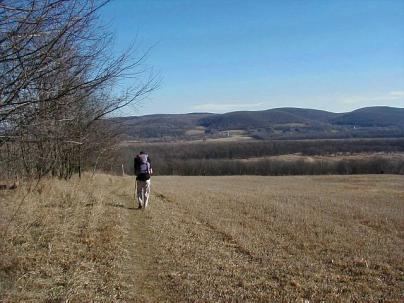 Rolling farmland with Pochuck Mountain in the distance 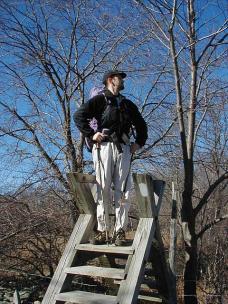 Toward the end of the day, we reached the one impediment to horizontal travel; a steep climb up Pochuck Mountain. We reached the shelter of the same name at about four o’clock but decided to push on. Darkness fell as we traversed the rougher highland trails on Pochuck Mountain and we eventually set up a camp on the last ridge about four miles from the shelter. A hearty dinner of beans and rice was consumed and we settled down to a chilly night.

Saturday — The plus side of winter hiking is that you get plenty of sleep. We’d gone to sleep at about 8:30 and by 6 in the morning, we were up and well rested. The idea of oatmeal didn’t appeal, so we headed out directly to do some warm-up miles. The trail quickly descended into the next valley and the sun came up. Frost crunched under our feet as we faced another gorgeously clear day.

Down in the valley we encountered the first surprise of the day; a relocation through Vernon Valley along an extensive boardwalk through beautiful marshland. This is the Pochuck Quagmire and is 3000′ of boardwalk through cattail marsh and was built between 1995 and 2001 (see ATN, March-April 2000). The boardwalk meanders around always a couple feet above the surface with nicely spaced benches to rest upon. It was entirely deserted except for a group of perturbed Canada geese and perhaps a half dozen twittering bluebirds. In the middle of the boardwalk loomed the impressive suspension-type “Bridge to Nowhere” over a small creek. Then more boardwalking. A few more miles of field walking (including a railroad track crossing and a very active cow pasture) brought us to the end of valley walking.

Time to pay for all this easy terrain with some elevation gain! The imposing wall of Wawayanda Mountain blocked our path. After some impressive talus piles near the base, we slabbed south and up finally reaching the rewarding Pinwheel Vista at the top. The valley we’d spent 24 hours traversing was laid out before us and in the distance we could see the greatly-diminished monument shining in the morning sun. Photos and refreshment were taken.

We resolved to kick it up a notch. Not only were we feeling good, rested, and able with easy trail and light packs, the siren call of pizza beconned toward a long-milage day. Wawayanda State Park was lovely and we strode purposely and at great speed through nice woods passing occasional day hikers, canines and a pair of horses. There was a small beaver pond (the southernmost such pond on the AT?) and a number of picturesque stream crossings. We were making great time and spirits were high.

Mike walks the wood. Boardwalking through the frozen wonder of the Vernon marsh.

Kicking it up a notch on Prospect Rock. Greenwood Lake lies beyond.

Suddenly the terrain changed abruptly. The trails were much rougher and we negotiated our way up and down over large patches of bare rock; we had reached the next ridge of the Applachians and glacial processing was evident. By 3:15 we had reached Prospect Rock. Soon thereafter we crossed the state line into New York. We were elated and stopped for the neccessary photos and celebration. The large Greenwood lake was spread out in the valley below us and smaller ridges stretching out to the south east. From here, the trail turns properly north again and heads for Maine and away from the sprawling Mid-Atlantic Metropoli. To my astonishment, we could faintly see the top of the Empire State Building and midtown Manhattan in the hazy distance! In the other direction, the High Point Monument could still be seen. We were seeing the entire breadth of New Jersey!

But we couldn’t stop for long. We still had six miles to travel and only about three hours of daylight. The terrain was now decidedly rugged with long stretches of bare rock. We veritably flew over the ground crunching snow and eating up the miles. Three miles to go and the sun had set; two miles to go and it was getting decidedly dark. We managed to get to within 3/4 of a mile before we had to don headlamps and we finished our hike the same way we started it, in the dark, under razor-sharp stars.

We were footweary and ravenous after 18 miles of trail and a killer pace and we were each packing a large bottle of Hunger Sauce. Thus the final stop for the day was at Frank’s Pizza in Warwick, NY. We ordered the largest, thickest pizza available and sat back to wait. I’ve been to quite a number of pizza joints in my day from the lousy to the sublime and Franks rocketed its way to the top of the list in short order. The pizza itself was spectacular and just what the doctor ordered. Thick, juicy and packed with meat and mushrooms.

But that’s not all! Frank’s is an unassuming place with photos of race cars and little league teams the place sponsors on the wall. Pizza dough was being flung around the kitchen from one person to the next in a fascinating ritual with ever-changing rules. The bathroom is in back through the kitchen and to say that Frank’s is informal would be an understatement. I’d mentioned to one of the guys that they’d been recommended to us by a local couple we’d met up on the trail. By the time we’d finished, three or four employees including Frank himself had joined us in the dining room and we had quite a long conversation about any number of topics. They’re a bunch of genuine Italian-American fellas from Staten Island and take immense pride in their work. Judging by the steady stream of phone calls and customers dropping in, this pride translates into booming business for the past 25 years.

We staggered out into the cold after about an hour and a half stuffed to the gills with pizza and good karma. It’s all good!