One More Hill of Consequence…

Virginia AT: Manassas to Snicker’s Gap

It has been a long, long time. I haven’t been out solo backpacking since… gee, it has been a while, hasn’t it? It’s the middle of a particularly mild week in a particularly mild winter and I have a raging case of Cabin Fever that would put consumptives and plague victims to shame. It’s definitely time to get out. Furthermore, Valentine’s is looming and I simply can’t face the cute and cuddly couples that are sure to overrun the place.

Saturday, Feb 13 After about a week of beautiful, springlike weather, suddenly a cold-snap has arrived. Never-the-less, I set out into snow flurries and sub-freezing temperature with a determined air. I have decided to try a novel approach to distance hiking here in the mid-atlantic where trails tend to be linear and hikes involve either back-tracking or two cars. I left a bike, helmet and accoutrements in the basement of the Snickersville General Store in Bluemont, VA and drove south to Manassas Gap/I66 where Rufus, my trusty Honda, was sequestered at the trailhead.

Despite getting an early start, I didn’t hit the trail until 1pm. Fortunately, the weather was sunny and spirits were high despite the stiff breeze and sub-freezing temperatures. Never-the-less, I tramped north. The day passed uneventfully as the path wound through tall, barren trees, fallen leaves, crunchy hoar frost and downed branches from the winter storms. The area would be, I’m positive, gorgeous in warmer seasons when the leaves come out and wildflowers abound. As it was, the place had a sort of austere beauty like the stage before a play or the sky before a dramatic sunrise.

The only item of particular note was a dozen or so radio and microwave towers which are accessible off a side trail. These seem to constitute high tourist potential here as there is a large sign and well-marked trail to what is nothing more than an unsightly industrial outpost in a vanishing wilderness.

This ugliness was offset by the miles of travel through the G. Richard Thompson Wildlife Management Area and VA Wildflower area which, while not providing any wildlife (either flora or fauna) at least had nice even trails. By four, the sun and temperature were both dropping and I rolled into Dick’s Dome Shelter. From the name I had expected some nearby geographical feature from which the shelter derived its name. But, in fact, the Dome in question is the shelter itself; a gray-shingled icosohedronal dome with a small footbridge and latrine in an otherwise uninteresting dell. The light was fading so I quickly got warm and set about wumping up some chow. The cold had not treated my olive oil well as it had congealed into a milky white foam. Furthermore, the cold had done unusual things to my stove which refused to pump. Finally, some liquid gas was squirted into the burner which, after burning merrily for a few minutes, primed the system enough to vaporize the next batch of fuel and allow normal cooking. After this dramatic ritual which added a whole new excitement to pasta with mushroom sauce, I rolled into bed taking the water bottles with me. 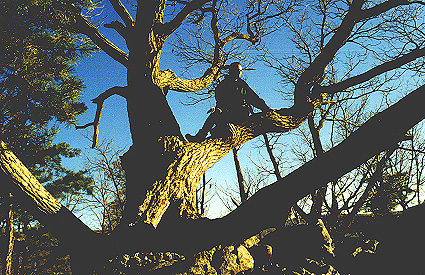 Sunday, Feb 14, Valentine’s There is a problem when you go to sleep with the sun at 6pm. At 2am, you’ve had your full eight hours of shut-eye and you’re rarin’ to go. Unfortunately, it’s still quite dark with no dawn in sight and the temperatures have dropped (in this case) to a seasonable 18 degrees. I was warm enough in my sleeping bag and didn’t savor the idea of doing the flaming stove trick in the dark. So I rolled over and had four hours of very bizarre dreams.

Finally, it was light and I got up. Things were still quite cold and I alternated between nursing the stove to life and dancing around trying to get warm. By sun-up I was out and on the trail and warming up in a hurry. The first two miles of trail are gorgeous. They wind through more of the Wildlife management area and then the appropriately named Sky Meadows State Park. Excellant views and grassy expanses reminicent of the balds of the Great Smokies. Then it was down a long descent to Ashby Gap where Rt 50 crosses.

By this time, both water bottles were in the process of freezing and I was worried. I knocked at the door of a lovely, very old house and filled the bottles with hot tap water. Stuffing them in socks kept the water insulated nicely and by the end of the day, the water was still lukewarm. Good warming fluids for a cold day. Four more miles pass in a trance.

The last seven miles of the day were spent on the “Rollercoaster”–a series of hills each roughly 500 feet tall and roughly a mile apart. No one is particularly challenging, but taken as a group it is moderately brutal. After doing five of them, I stumbled, on my last legs, into Sam Moore shelter very much the worse for wear. Sam Moore is a shelter along more traditional lines for the area. Very clean, log and mud construction with a mailbox for registers and a separate dining pavilion. Many thanks to the people who undoubtedly slaved away making such a upscale wilderness abode.

Again, stove excitement, dinner, bed and a whole other series of bizzarre dreams involving saving the world and restoring an old train station for residential use.

Monday, Feb 15 Last day. As usual, I was looking forward to getting out and getting back to civilization. In that, I suppose, my uber-mission was accomplished. As usual, the sky was completely clear, but this time the temperatures were quickly on the rise. I hiked four miles over the remaining rollercoaster bumps. Gratifying vistas of NW Virginia and the Shenandoah could be had at the first bump and also from some admirable rocks near Bears Den Hostel. Out to the road, down to Bluemont and into the general store for a rousing bowl of ministrone and juice. Ah.

Unfortunately, the day’s exertions had barely begun. Having hiked 26 miles in the woods, it was now time to bike the 26 miles back along the roads. The first four miles were brutally, unrelentingly uphill to the top of the ridge. Just when I thought it couldn’t get any higher, around the corner would come the next hill. “One more hill of consequence!” encouraged a local out painting his mailbox in the gorgeous 50-degree weather. Is that this one here or the one five hills further on?

When I finally took the summit, I was greated by Mt. Weather, a large, mysterious government compound formerly home to the earbud and black helicopter set; miles of polished chainlink and dire warning signs, large humming buildings of dubious purpose… Apparently there are underground levels that go 17 stories down. Probably aliens in bactine tanks and ufo remains as well…

Suffice it to say, I eventually regained Rufus at the trailhead and collapsed into the comfort of padded seats, non-hiking boots, and fresh fruit. Contentedly, I drove back to the General Store yet again for the Award Winning Carrot Cake–thoughts of which had been largely responsible for getting me through the cycling portion. And then a hot bath. Ah, pure hedonism…

It was a fine start to the 1999 hiking season. I return refreshed of spirit though certainly not of limbs.